This tasty vegetable has a good resistance to cold, but it grows long enough - up to three weeks. So you can sow it immediately when the earth is free from snow cover. Many gardeners prefer to do this on May Day holidays. But Galina Kizima is glad to offer everyone a planting method for carrots that can perfectly protect the crop against diseases and harmful parasites. In this article we will explain how to sow correctly and show a master class.

The most popular ways of planting carrots do it yourself

In order for the seeds to give amicable shoots, a positive temperature regime is required. As a rule, the soil should be heated to five to eight degrees. As a rule, heat in different regions comes unevenly, so you can plant carrots in April. And somewhere, as has already been said, warm May days are set aside for this.

Somewhat earlier it is allowed to sow late varieties. Being in the ground, they are able to survive the frosts of up to four degrees.

They know a few, but you can sow carrots three times in one season. If everything is done correctly, then actually get several harvests, one of which will be in the early spring.

Before sowing seed fund must first be prepared. Seeds contain many essential oils that slow down their growth. It is recommended to get rid of them before landing. This measure will significantly improve the germination of culture.

There are several ways to prepare seeds, the best of which are the following:

Landing can be done in several ways, at your discretion. Each method is good in its own way - the method of Kizima, the use of toilet paper, the use of an egg cell, planting in granules. The advantages of each of them consider in more detail.

How to plant according to the method of Kizima

This method is very interesting, does not require special labor costs. It is not necessary to prepare the furrows in advance and then thin out the shoots after germination. Carrot seeds are mixed with fertilizer and fine sand.

Such a measure makes it possible to avoid the thickening of your beds.

The resulting mixture is sown on top of the ground, as if you were salting some kind of dish. Then everything should be lightly sprinkled and not very slam. Landing is complete. The technique is great for older gardeners who do not have enough power to arrange furrows in which seeds are sown. Many do not believe in the success of such a technique, but it has been repeatedly proved in practice - the culture is growing quite successfully, it constantly pleases with good yields. And care for her needs a minimum.

Many know that in the store you can buy a special ribbon with seeds, which will only need to be placed in the furrow and sprinkled with soil composition. Easy and fast, but germination leaves much to be desired. And the variety is not always possible to pick up, as many would like.

But there is a secret - you can make such a ribbon yourself, using ordinary toilet paper and stick seeds on it. To do this, from the roll are cut the necessary size of the strip, which will be convenient to work. Their length is usually from one to one and a half meters.

The second stage is the preparation of paste. It is necessary to pour half a cup of flour with a small amount of flour, stir it to make a composition that is thick like sour cream. Here you need to glue carrot seeds to paper ribbons.

For convenience in the work, the seeds are poured out on a dish, distributed over some distances. A simple match is made up of a glue mass, a couple of seeds are picked up with its drop, and all this should be glued to a strip.

A pair of seeds at a time is taken for insurance in case one of them does not rise.

Thus, it is necessary to arrange three rows for the entire length of our tape. Now it remains to dry the paper well.

The flour mass, having dried, will firmly hold the seeds on the surface of the paper. This has its advantage - there is no need to apply chemical compounds.

After drying the tape, it should be cut into strips, put them in the prepared grooves, sprinkle with soil. The rest of the way does not differ from the classic version.

Another option that eliminates the need for weeding. Cooking cells from eggs should be in winter. The cardboard from which they are made should be loose, soak well with water. This is important - root crops should be able to germinate through cardboard material. In case the cardboard is thick enough, you can make bottoms in each cell.

Boxes are laid out in the prepared soil, powdered. In the grooves laid on a pair of seeds. As you can see, carrots for a normal growth created a comfortable distance. By the way, the seeds in the cell can be laid out at home, and then put them on the beds. 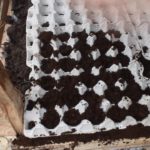 Cells are put on the bed and sprinkled with earth. 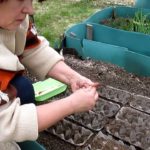 Carrots Sit Right In The Cell 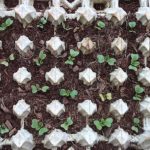 Each carrot sprouts in its own cell.

How to plant carrots in granules in open ground

The way of many gardeners is genuine interest. Its difference lies in the fact that the carrot seed is covered with a special shell, which collapses during growth, giving way to escape.

Granulated seeds should be planted in the spring when the snow has completely melted. As a rule, this is done in late April - early May.The soil in the garden is prepared and fertilized in advance. Small dimples are arranged with a finger, the depth of which reaches two to three centimeters. The interval between them is from four dollars to five centimeters. It is very important that the soil is well moistened - it helps to destroy the shell layer on the granules.

Putting the granules in the pits, they are sprinkled with soil, slightly pressed down from above.

As you can see, the options to plant a sufficient amount of vegetables. Having adopted the most convenient method of sowing in your case, you will annually provide yourself with tasty carrots grown by your own hands with minimal labor costs in the open ground.